European-Kurdish Cooperation in University Reform Is Seen as a Model for Iraq, Al-Fanar Media 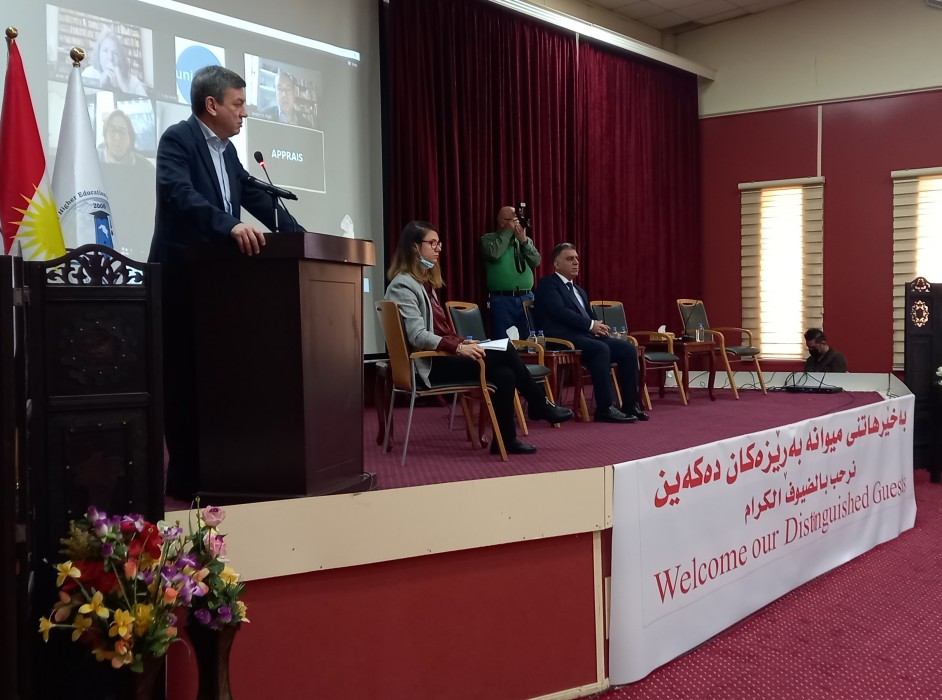 Reposting of the article of Gilgamesh Nabeel on Al-Fanar Media, 1 Feb 2022 (link to the original article)

Leaders of universities in Europe and Iraqi Kurdistan met in Erbil in November to discuss ongoing efforts to improve higher education in the region. (Photos: Ministry of Higher Education and Scientific Research, Kurdistan Region in Iraq)

Kurdish and European university leaders have held the first face-to-face meeting in a three-year project to improve higher education in Iraqi Kurdistan.

Held on November 29 and 30 in the regional capital of Erbil, it brought together participants in the Apprais project, started by the Mediterranean Universities Union (Unimed) early last year.

Unimed, a Rome-based organisation grouping 140 universities from 23 countries, sees Apprais as a model for university reform in other parts of Iraq.

“Due to the staff’s rare international exposure, study visits in the E.U. will represent an added value for their career and will expose them to a different system.”

Previous meetings and webinars took place online because of the Covid-19 pandemic and intermittent lockdowns.

“Unimed and representatives of European and Kurdish universities met in Erbil to share and disseminate the first-year work results,” Salah Saeed, president of Charmo University, in Sulaymaniyah in Iraqi Kurdistan, wrote to Al-Fanar Media.

The Apprais project aims at rebuilding and modernising the governance of higher-education institutions in Kurdistan, with a focus on strategic planning, quality assurance, and implementing the Bologna Process.

The Bologna Process is a series of agreements between 49 member countries of the European Higher Education Area (EHEA) to ensure comparability in higher-education standards and promote recognition of credits and learning mobility.

According to Mohammed Hussein Ahmed of the Ministry of Higher Education and Scientific Research in Iraqi Kurdistan, the Apprais project is part of a new strategy of radical reform adopted by the ministry in the past seven years to meet the challenges of globalisation.

Ahmed, who is head of Apparatus of Supervision and Quality Assurance at the ministry, described the project as “an opportunity to make academic partnerships with quality universities in Europe.” The aim, he said, was “to convey the academic excellence of European universities to Kurdistan universities, in particular through implementing the Bologna Process, quality assurance and good governance.”

“The project will contribute to the modernisation of the Kurdish higher-education system and support higher-education institutions in meeting international standards,” she said. It will also “empower university staff to effectively manage and implement changes.”

Marchionne added that the Apprais project went hand in hand with the Kurdish government’s agenda to reform university governance.

Jawhar Fattah Saeed, a former president of Salahaddin University, in Erbil, said that the project would strengthen the monitoring of universities.

The Kurdistan region has largely escaped the negative effects of the U.S.-led invasion of Iraq in 2003 and the ensuing conflict.

Unimed’s consultation with local universities found, however, that they faced difficulties in equalising certificates, transferring professors to European universities, and implementing the European Credit Transfer and Accumulation System, or ECTS, the standard means for comparing academic credits in the European Higher Education Area.

“This is why Unimed selected this region for implementing a feasible reform project that, in the near future after the Apprais project ends, can be easily transferred to other Iraqi Kurdish universities or other universities in Baghdad or Basrah,” said Marchionne.

Salah Saeed, of Charmo University, said dozens of meetings had been held in which “we have focused on the needs of quality assurance departments, conducted surveys on decision-making processes in Kurdish universities, and have shared those results with our partners.”

He added that “Charmo University’s department of international relations has also translated the bulk of higher-education legislation and laws from Kurdish into English.”

The project “will also upskill 80 administrative staff on university administrative management, quality assurance, and internationalisation strategies,” she said. “Further, 160 university staff (20 people from each institution) will benefit from the institutional training of trainers.”

Saeed was particularly proud of the part played by Charmo, the region’s smallest and youngest public university, in implementing the Bologna Process.

The Bologna Process was designed in part to  establish the European Higher Education Area. For member countries, the main goal of the EHEA is to increase staff and students’ mobility and to facilitate employability.

Charmo University, set up in 2014, is working with the University of Evora in Portugal. “We are conducting surveys on the implementation of the Bologna Process in Kurdistan, addressing the challenges and shortcomings, and identifying the needs for improvement as well,” said Saeed.

Hussein, of the University of Sulaimani, said implementing the Bologna system and ECTS will facilitate credit recognition and equalising of certificates. “This project also enhances chances of participation in more mobility programs with European partners resulting in more student and staff exchanges,” he explained.

European-Kurdish cooperation “will promote reciprocal learning and exchange of good practices,” he added.

“Due to the staff’s rare international exposure, study visits in the E.U. will represent an added value for their career and will expose them to a different system. They need a stronger practical training and to develop soft skills like problem-solving, entrepreneurship attitude, and critical thinking.”

PrevPreviousAutonomy, good governance and quality assurance: a Roundtable with Kurdish Universities in Erbil on November 29th, 2021
NextThe University of Pisa welcomed Kurdish Universities and the Ministry of Higher Education and Scientific Research to explore possible collaborations between HEIs, local authorities and stakeholdersNext

This project has been funded with support from the European Union. This website reflects the view only of the author, and the Commission cannot be held responsible for any use which may be made of the information contained therein.

Except where otherwise noted, content on this site is licensed under a Creative Commons Attribution 4.0 International License.
The project number is 618781-EPP-1-2020-1-IT-EPPKA2-CBHE-SP.